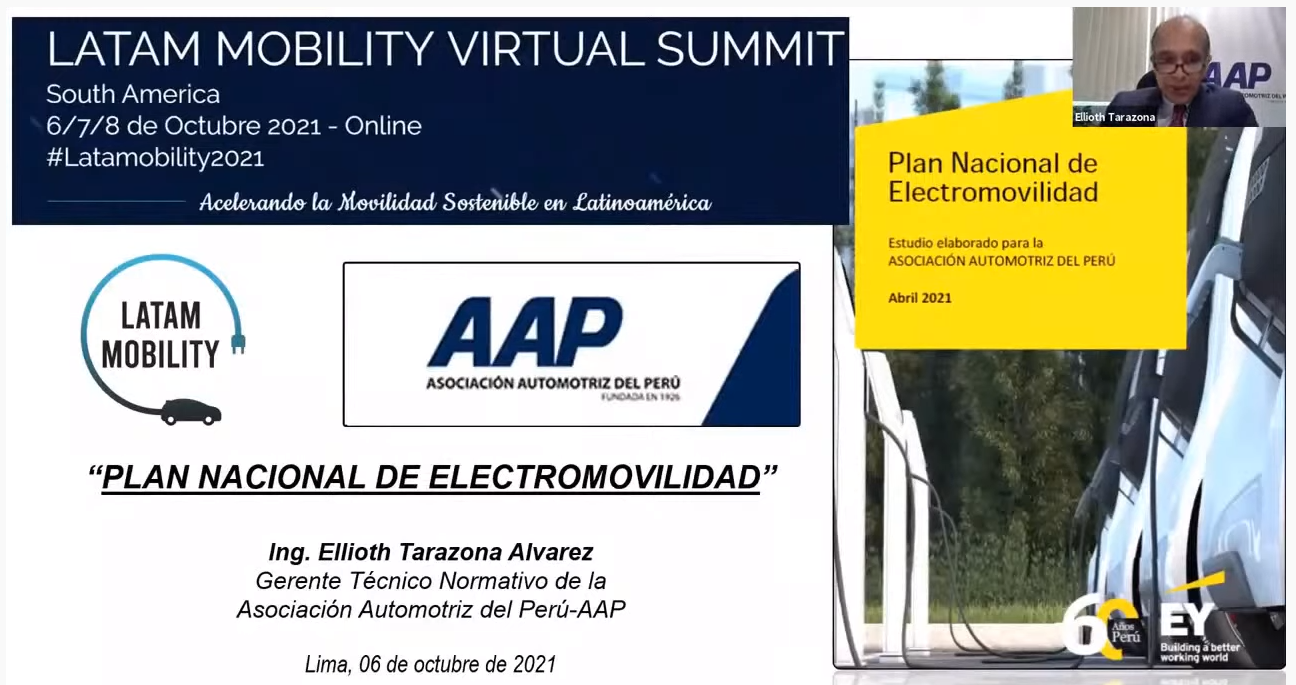 14 Oct Automotive Association of Perú: National Electromobility Plan May Be Approved by 2022

Posted at 17:40h in Media area by Antonio Vilela

Ellioth Tarazona Álvarez, Technical Regulatory Manager of the Automotive Association of Perú (AAP), indicated that the organization is working on a proposal for a regulatory framework to promote electromobility in the country.

The association, founded in 1926, which brings together the country’s importing and marketing companies, has the mission of promoting the development of a modern, efficient, sustainable and environmentally friendly transportation system, so the adoption of low-emission vehicles is one of their priorities.

“The first thing we are doing is working on a proposal for a regulatory framework, which could be carried out between 2021 and 2022, and which includes: the approval of the National Electromobility Plan; regulation of charging and supply infrastructure; creation of the National Electromobility Fund and regulations linked to the disposal of batteries,” Tarazona explained.

According to the AAP Manager, Perú has a total of almost three million vehicles on the road, of which more than 85% are light vehicles and the rest belong to the heavy group. Of these, almost 100% are internal combustion vehicles. The country has a penetration of less than 1% of electric vehicles, and less than 1% compared to other Latin American countries.

Tarazona explained during the X Sustainable Mobility Summit, organized by Latam Mobility on October 6th, that the AAP is working not only on the regulatory framework, but also on key points, such as the establishment of operational incentives for 2022; public charging systems implementation; recharging points at new buildings; advantages for electric vehicle circulation and preferential parking lots.

“Apart from the proposal, we expect to establish economic incentives for 2022 and 2023; work on special rates against traffic accidents; vehicle insurance; special rates for tolls and residential differentiated electric rate, and promotion of mass public transportation of people and goods on the urban radius”

The proposal also includes other incentives, such as the temporary reduction of the Ad-Valorem tax to 0% for the next six years; a 0% VAT for Battery Electric Vehicles until 2030, and 9% in taxes for Hybrid Electric Vehicles (the current VAT in Peru is 18%). In addition, a fuel tax on CO2 emissions, and a corporate tax credit to reduce annual income tax payments.

You may be interested in: ANAC: Hybrid Vehicles Sales Grow by Over 370% in Chile

The AAP estimates that by the end of 2021, the vehicle fleet will have a little more than three million vehicles on the road throughout the country. Out of these, 2,545 will be electric. By 2030, the outlook would be for more than 4.2 million vehicles, of which more than 200,000 would be EVs.

“To achieve the objectives, a high-level of State intervention is required, in terms of regulation and promotion of electromobility. Also, taxes must be applied to polluting technologies, such as CO2 emission fuels, and the implementation of public charging infrastructure must be promoted, which will increase the demand for electric vehicles,” concluded Tarazona.

Among the benefits mentioned, it is expected that by 2030 there will be an income of almost $50 million in tax revenue; sales of electric vehicles will be 24.5%, and 4.8% of the vehicle fleet will be of this type; and emissions will be reduced by 1.2 million tons of CO2 equivalent to 48% less compared to current numbers.

Below, you can watch the Summit: