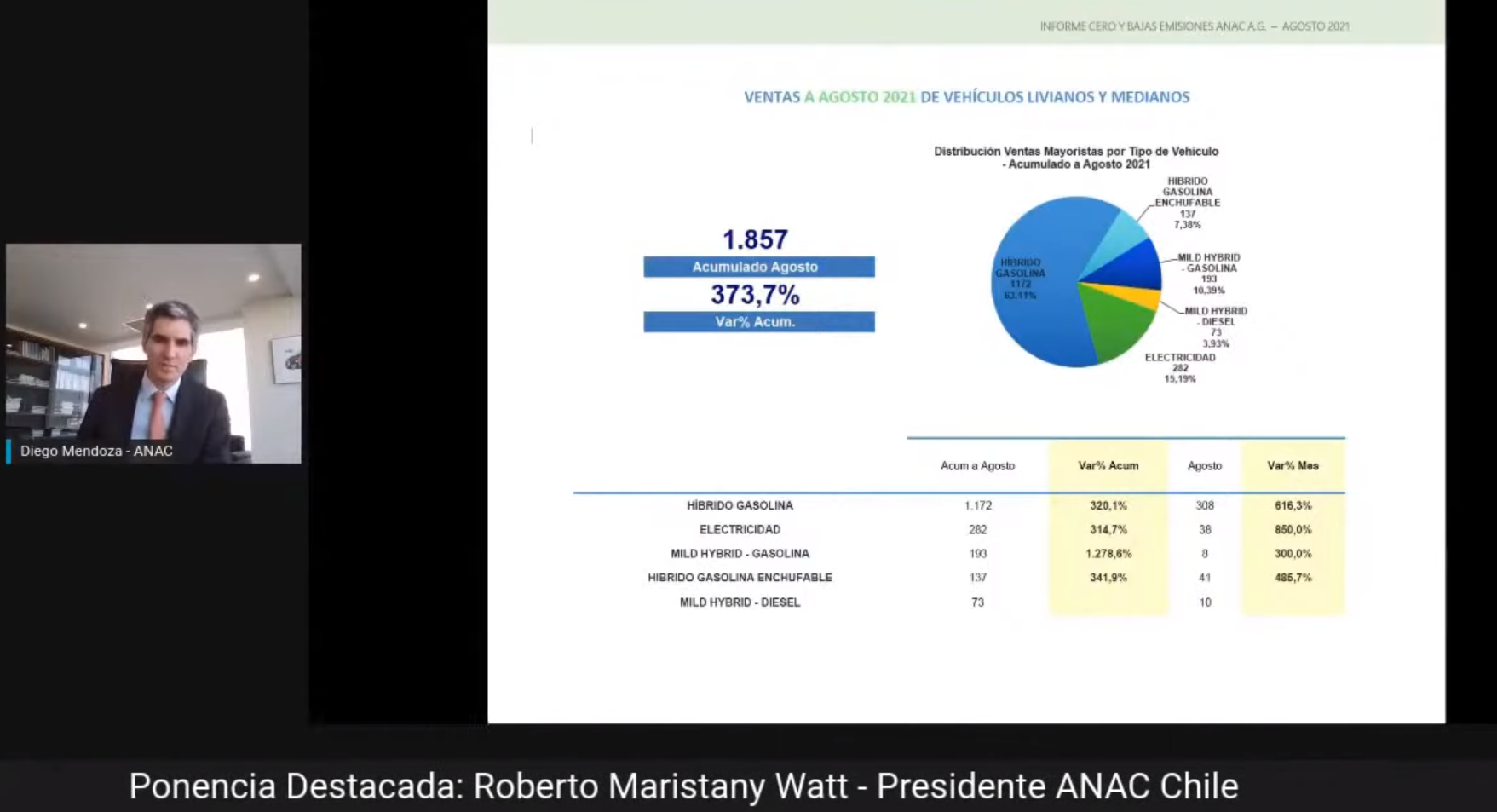 12 Oct ANAC: Hybrid Vehicles Sales Grow by Over 370% in Chile

Posted at 09:34h in Media area by Antonio Vilela

The COVID-19 pandemic affected the market across all sectors, with vehicles sales being one of the hardest hit. However, the vehicle fleet is seeing the light at the end of the tunnel, with a significant increase in sales during the last few months.

This was explained by Diego Mendoza, General Secretary of the National Automotive Association of Chile (ANAC), an organization representing all importers of light, medium and heavy vehicles in the country, during the X Sustainable Mobility Summit, organized by Latam Mobility, on October 6.

“When comparing sales from January to August this year with the same period a year earlier, we have a 373.7% growth, boosted by sales of conventional hybrid vehicles. Only in August, 1,170 have been sold, a record for hybrid sales in Chile, and 282 electric, another record after the pandemic,” Mendoza indicated.

In terms of segment evolution, hybrids registered record figures in June, July and August, surpassing 200 units each month. Same case with electric vehicles, with 80 units sold in June; it dropped to 47 units in July, although it is still the best month for this class since records have been kept, and the same in August.

Mendoza pointed out that the figures show a higher penetration of low-emission vehicles, but the rate is still lower compared to internal combustion vehicles. By 2020, sales represented less than 1% in Chile.

In contrast, before the COVID-19 pandemic, between 32,000 and 35,000 thousand units per month of conventional internal combustion vehicles were sold in the country; and so far in 2021, 1,800 low-emission vehicles have been sold.

Among the segments, those that have shown record numbers since May have been plug-in hybrids, with 48W batteries, perceived by consumers as an option that removes the anxiety of using a 100% electric vehicle.

For the secretary of ANAC, one of the great challenges of the sector is the development of an incentive program focused on the consumer, which allows these technologies to be closer to people.

Another of the representative’s suggestions is linked to the lack of public standards for the installation of electric charging stations at public, private and residential areas, which are essential to attract a greater number of consumers to 100% electric vehicles for outdoor recharging.

“Chile does not have a massified road charging network. You can’t plan a trip from the center of the country to the north or south without having secured charging points. Electric hybrids provide the best of both worlds: 45 km driving range in the city and gasoline or diesel recharging for longer trips. That duality makes them attractive to customers,” Mendoza said.

During the event, Mendoza recounted two important experiences that have been developed during pandemic times and have served as an impetus for electromobility in Chile: Electrologística and the “Mi Taxi Eléctrico” (My Electric Taxi) plan.

The Electrologística was carried out by the “Fundación Conecta Logística”, which consisted of providing companies with electric trucks for transporting different types of goods, from light to very heavy materials, at different times and with recharging facilities, while using telemetry to calculate the savings represented by these vehicles.

“The result was extraordinary. The companies liked the experiences, and even when they saw the cost savings, they bought these trucks, and even purchased more units. Interesting incentives. Now, it is necessary to replicate them with citizens,” said Mendoza.

The other experience was the “My Electric Taxi” plan, which consisted of the renewal of vehicles with government subsidy, where 50 100% electric units were acquired as a first stage. The reception by drivers and users was positive, and the plan is to replicate it across different regions of the country.

In conclusion, the Secretary General of ANAC said: “We are moving in the right direction. Chile is an example of electric public transport, such as the Extra Santiago network, which has the second largest fleet of electric and hybrid buses in the world after China. We are proud of this, but we believe that there is still a lack of incentives to support these more environmentally friendly technologies, especially for individuals”.

Below, you can enjoy the full conversation.